Rositsa Kirova, who was sworn in on April 14, 2021, as Member of Parliament (MP) from the formerly-ruling Citizens for European Development of Bulgaria (GERB) party, is a partner of the infamous Kosovo drug lord Ismet “Curri” Osmani, who was arrested in 2019 in Pristina. The ambitious lady from Bulgaria’s Danube city of Vidin made headlines when former Prime Minister and GERB leader Boyko Borisov took her for a ride in his SUV and then put her first on GERB’s general election ballot for Vidin. Prior to making this public appearance with Borisov, Kirova was the coordinator for Vidin of the opposition party “There are such people” of late night talk show host and Bulgarian celebrity Slavi Trifonov but was expelled from the party after footage of the trip went viral.

Kirova, Osmani and two other individuals incorporated the joint-stock company Citadel BG in November 2004. Osmani participates with 20% of the shares. The listed activities are production of construction materials, adhesives, dry mixes and construction.

According to Ismet Osmani’s handwritten declaration, he is a Yugoslav citizen, born on September 4, 1962, and has renewed his passport at the Embassy of Serbia and Montenegro in Prague.

German and Serbian intelligence: Osmani is a particularly dangerous criminal

The German intelligence service BND wrote the following about Osmani just three months after he became a shareholder in Citadel BG:

The description of Ismet Osmani from a BND report from 2005

OSMANI Ismet, AKA “Curri”, a Kosovo-Albanian based in KOSOVSKA MITROVICA, deals with cigarette, drug (marijuana, heroin) and fuel smuggling and is considered particularly dangerous. He maintains close ties with UCK (the Kosovo Liberation Army – editor’s note), with THACI (former Kosovo President Hashim Thaci – editor’s note), whom he must have supported financially in 1998, as well as with Kosovar politician IBISHI Nuredin (smuggling).

BND’s report on Balkan organized crime with a focus on Kosovo became public after it was released by Wikileaks.

Ismet Osmani was previously mentioned in a Serbian police report from 2000, known as the “White Paper on Serbian Organized Crime”, quoted by the Serbian investigative portal Krik.rs, a partner of the Organized Crime and Corruption Reporting Project (OCCRP). 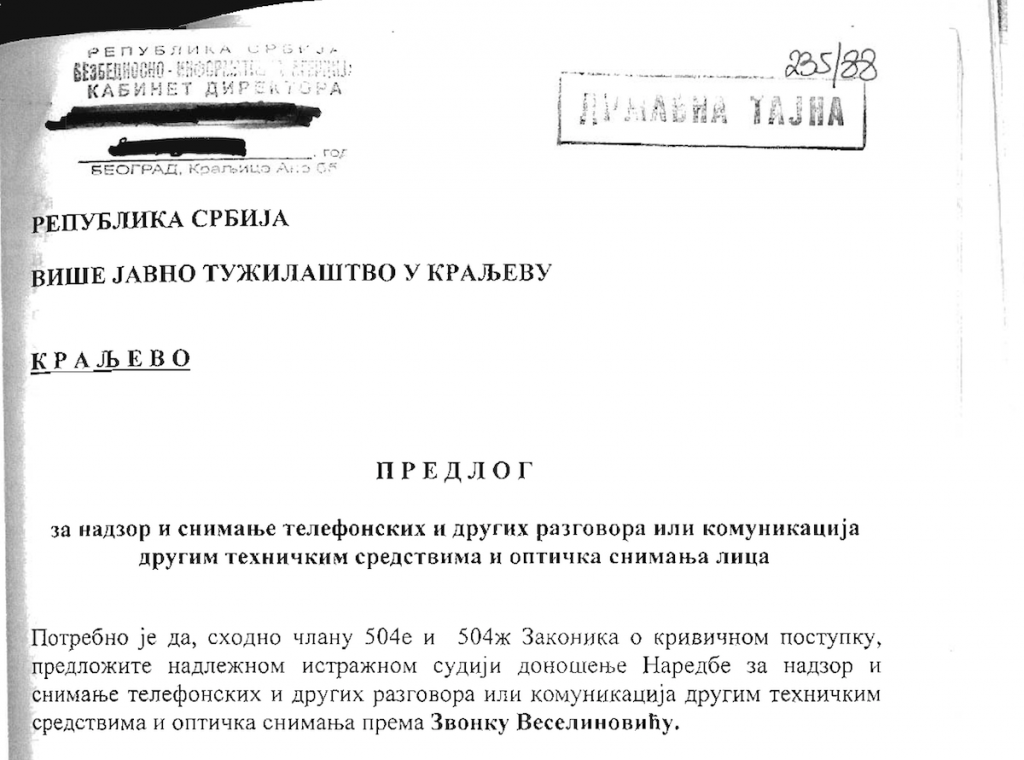 According to this report, of which Krik learned through a court hearing, Ismet Osmani is the leader of an organized crime group involved in international drug trafficking, working closely with Zvonko Veselinovic in Serbia. Veselinovic buys drugs from Osmani and transfers them into Serbia and sells weapons to the Albanians.

Ismet “Curri” Osmani, Ilir Bojku, Mentor Maqani, Fadil Thaci and Rrahim Hashimi, known as the “Curri Group”, were detained in Pristina in 2019. They are still under investigation for loansharking, fraud and coercion. In addition to Kosovo, the group is suspected of involvement in organized crime in the Czech Republic, where Osmani has permanent residency. According to colleagues from the Czech center for investigative journalism Investigaze, the group has never been actively investigated in the Czech Republic. Osmani has lived in a small town near Brno with two other Kosovo-Albanians convicted of drug trafficking in 2003.

The arrest sparked great media interest and was covered in detail by Kosovar media and the international press that follows Kosovo and Serbia news. Osmani’s group spent several months behind bars, but he managed to get out of custody in October 2019 on a bail of EUR 50,000.

As mentioned in the BND report, Osmani is considered to be close to former Kosovo President Hachim Thaci, who is charged with crimes against humanity by the International Court of Justice in The Hague. Osmani is also known as a confidant of Kadri Veseli, the former Chairman of the Assembly of Kosovo. After Osmani’s arrest, Kosovo media published photos of Osmani with Veseli and another prominent UCK figure, Sami Lushtaku, igniting a huge political scandal. Photos of Hachim Thaci with Fadil Thaci, who was detained as part of Osmani’s group, were also published, while the Courrier des Balkans wrote a report on the arrest and the subsequent scandals. The French-language publication calls Osmani one of the godfathers of the Kosovo mafia.

With the help of colleagues from the KRIK.rs, who have access to court documents and population registries in Serbia, BIRD can indisputably confirm that the partner of GERB MP Rositsa Kirova, the person described in German and Serbian intelligence reports and the arrested in Kosovo Ismet Osmani are the same individual who was born on September 4, 1962 in Yugoslavia.

BIRD tried to contact for comment Alban Arifi, Ismet Osmani’s lawyer, but he did not respond to our requests.

MP Kirova: I do not know such a person

On the opening day of the 45th National Assembly in Bulgaria, a BIRD reporter spoke with Rositsa Kirova, who denied knowing Ismet Osmani.

– I have no idea; I hear this for the first time from you. I don’t know this man.

– But you are partners, you are listed in the Commercial Register.

– I have many companies and partnership. It is possible, I will check, just tell me which company it was. I know what Citadel is, there had been a foreign partner.

Kirova promised to investigate the case and clarify it at a subsequent meeting with BIRD’s reporter.

However, the documents from the Commercial Register are indisputable. The company Citadel BG is currently in liquidation and Kirova is its authorized representative. She has made several unsuccessful attempts to close the company because registry judges have rejected the closure due to missing or expired documents. The last entry in the Commercial Register is from 2015 and it reveals that Rositsa Kirova has sent an invitation for a general meeting to decide to close the company to all partners, including Ismet Osmani. 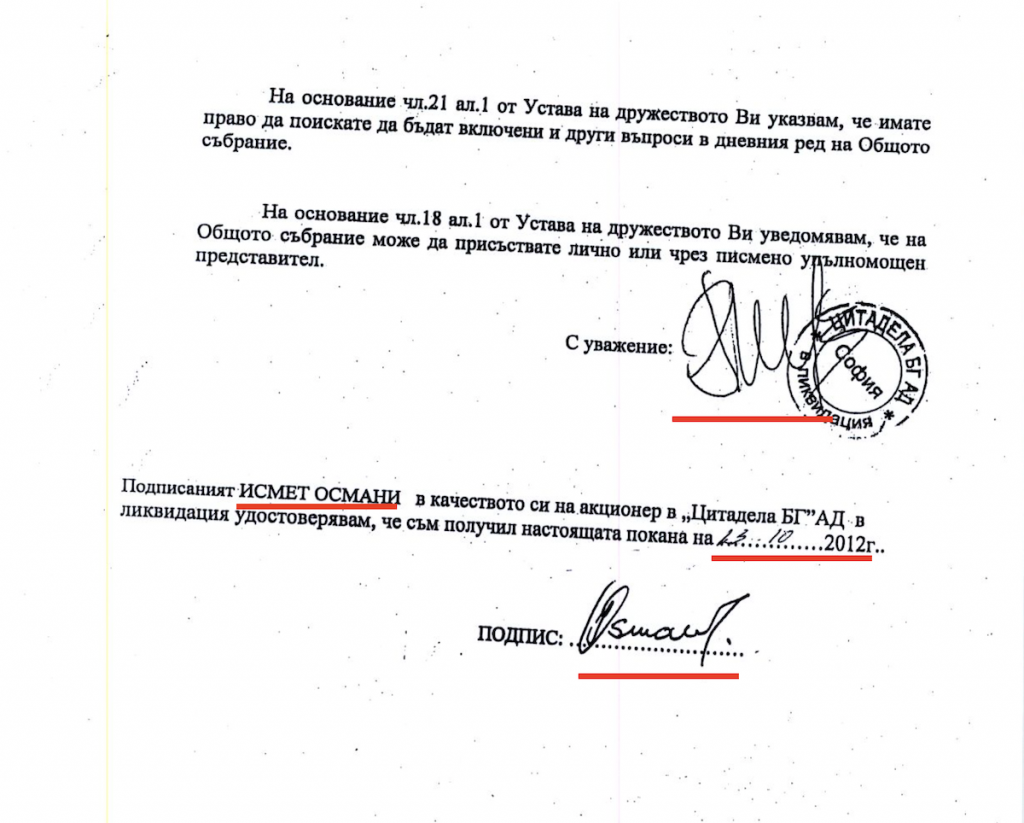 At the moment, the company Citadel BG is not closed and, at least according to documents, Rositsa Kirova and Ismet Osmani remain partners. if she wishes to end these business relations, Kirova must once again invite Osmani to a general meeting at which he personally or through a proxy should vote for the deletion of the company. 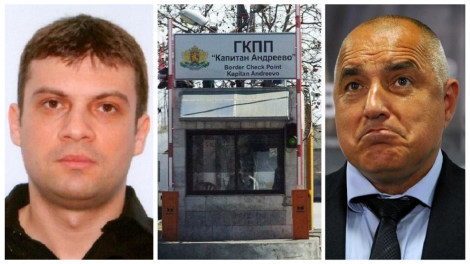 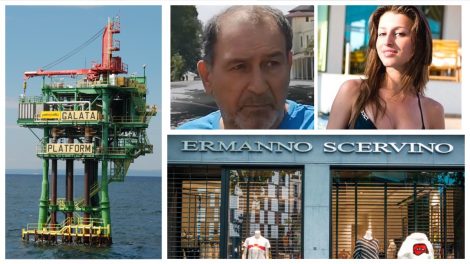 Yordan Hristov’s nephew turned out to be the head of a company, which produces gas from Bulgarian fields in the Black Sea. Hristov became known as Borislava... 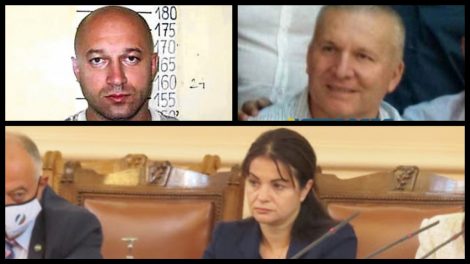 The blast of Petolachkata: Ammunition was intended for Georgia, but the prosecutor’s office does not see sabotage
‘Snow White’ from ‘Eight Dwarfs’ becomes fairy-tale rich, owns plenty of cash and properties in Bulgaria and Greece