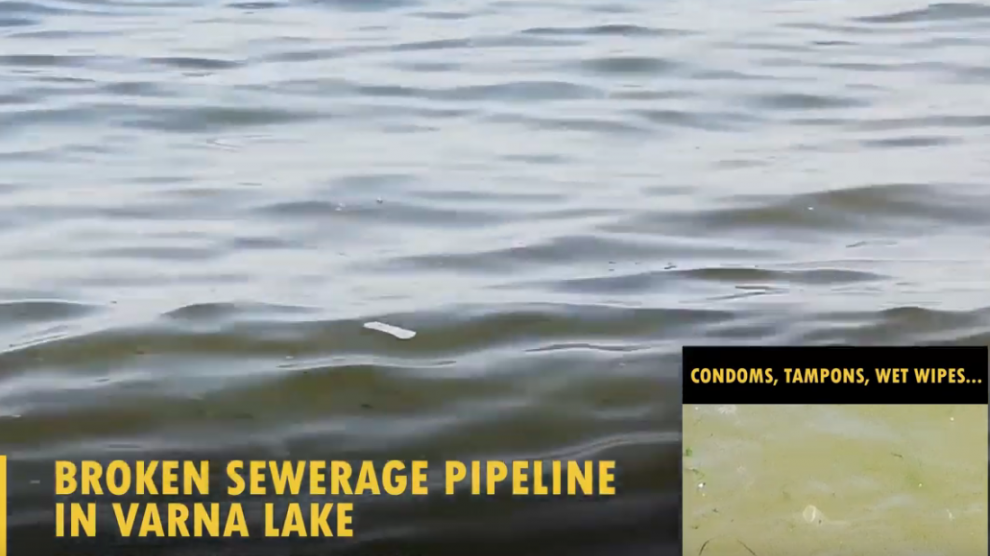 Improper management of a wastewater treatment pipe in the Varna lake has led to repeated toxic leaks since 2019. The subsequent and continuous discharge of millions of cubic metres of water polluted with faecal matter into the resort town river and bay exposes local aquaculture farms and touristic locations to polluted water. New data now shows a correlation between the presence of potentially toxic algae and the discharge of wastewater into the lake, while the actual impact of the spill remains unknown. 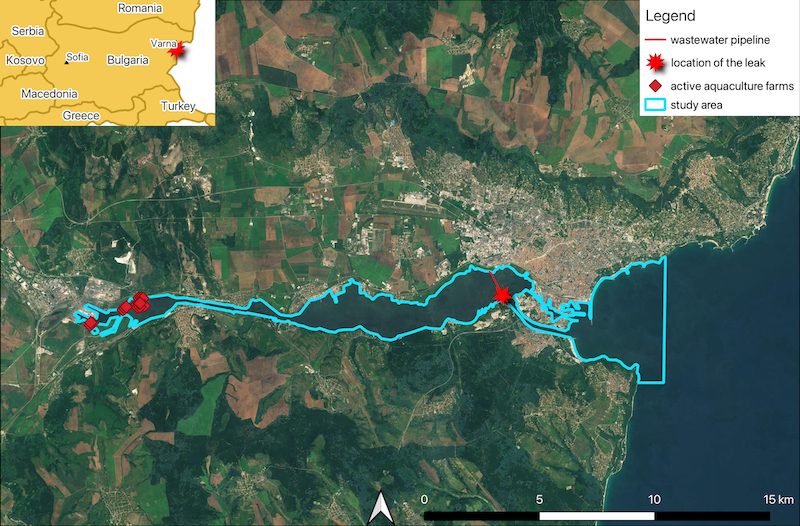 “Condoms, tampons and wet wipes on the Varna Beach…”; “3000 cubic metres of water charged with faecal matter spilling every day”; “Nine months of waste water leaked in the Black Sea. Fish is poisoned”; “Welcome to Varna, where due to a broken pipe the bay is polluted from sewage water flowing in from 4 neighbourhoods”.

In May 2020 alarmed social media posts from concerned citizens began appearing online, amid protests from locals outraged by the ongoing “environmental catastrophe”. Just a few days earlier, tons of dead fish had been reported to be washed up on the shores of Varna bay, leading to public outrage in the community. For the protesters, there is no doubt that this plague on local fish is due to the leakage of a broken pipe discovered within the lake.

According to Varna’s mayor, Ivan Portnich, there is no need to “speculate” over any type of pollution in the area. The discoloration of Varna’s bay and river water is a common occurrence due to phytoplankton blooms, which happen yearly. Similar episodes occurred in other regions, such as in Cape Kaliakra and Constanta, Romania, where yellow-brown water discoloration can be observed. Algal blooms are cast as a natural event, in other terms, as they can often happen in the spring and summer due to changes in temperatures and nutrients in the water. 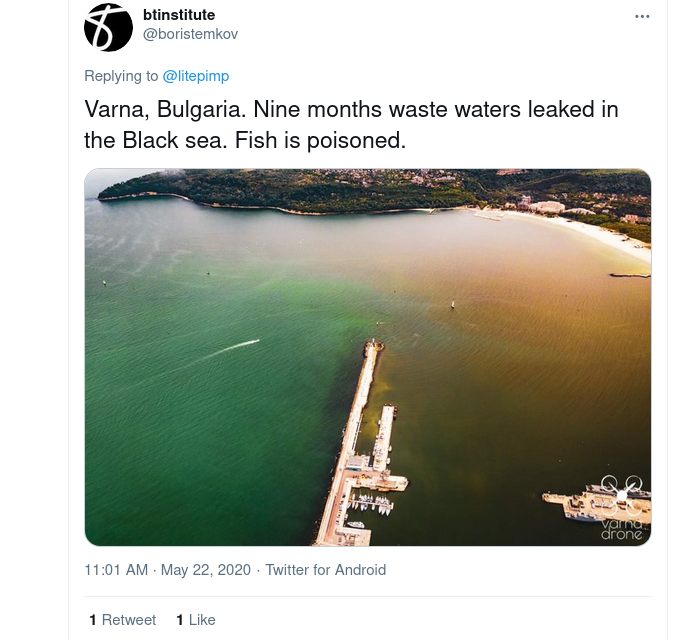 However, two years later, newly disclosed information now contradicts the mayor’s narrative. And while the actual stage of the pipeline’s repair remains unclear, satellite imagery analyses demonstrate increased eutrophication at the time of the leakage, potentially impacting the water with unknown effects in both the short and the long term.

The pipeline in question was initially laid in Varna’s river as part of a 5-million-euro project titled: “Transformation of the wastewater treatment plant in Asparuhovo district into a pumping station and construction of a transport pipeline below the bottom of the Varna lake”, financed at a 75% rate by the European Union. The construction of this pipe was awarded to the Greek company Sfelinos for the benefit of Vik Varna, a public water utility company managed by Varna’s municipality.

Dnevnik, a local media outlet, has since documented the many irregularities linked to the pipeline implementation in detail; from the incomplete assembling of the pumping system by Sfelinos, to delays and incorrect document filings by an expert commission supposed to assess its proper construction.  In 2011, upon alleged completion of the pipeline, 25 individuals signed a document stating the pipeline was both buried in the lake bed and ready for operation. However, it was actually aboveground, lying unprotected on the lake bed, Dnevnik reports.

Not being buried, the pipeline was eventually damaged in 2015, when a ship stuck it with its anchor. Varna’s mayor was informed of the risks of leakage linked to this incident that same year, according to Dnevnik.

The first official notification of a leakage was reported to the municipality in August 2019. It didn’t disclose this information to the public until January 2020. With an estimated daily sewage discharge of around 3.000 cubic metres, this amounted to the spillage of millions of litres of toxic water polluted with faecal matter from the broken pipe – information left undisclosed to the public for eight months.

While local authorities announced a 1.3 million bulgarian lev fund in order to repair the pipe later that year, and contracted company Hydrostoy to fix the pipe within 3 months, the technical difficulty of burying the pipe allegedly delayed the project. When a second and third leak eventually occurred in January and again in May 2021, mayor Ivan Portnich announced that a technical solution to bury the pipeline was still being explored.

It still remains unclear as of today when the full repair of the pipeline will finally be achieved, thus leaving it at risk of other potential leakages during this uncertain period. But what exactly was impact of the leaks so far, and what effects could the next ones have?

Higher levels of eutrophication during the leaks

In a satellite imagery analysis conducted for the Environmental Investigative Forum, PhD researcher Christina Orieschnig and GIS expert Kristof Horvath were able to visualise chemical characteristics linked to eutrophication levels in Lake Varna from 2016 to early 2021. Remote sensing of the chlorophyll concentration in the lake area allowed them to establish “pattern breaking” values of chlorophyll in 2019 and 2020, demonstrating higher eutrophication levels overlapping with the reported leak.

Eutrophication is a seasonal phenomenon where water becomes enriched with various nutrients, such as nitrogen and phosphorus, and causes algae to multiply and bloom, typically discolouring the waters. While this phenomenon can occur naturally, it can also be induced or worsened by human activity, notably pollution – this is then called “cultural eutrophication”.

Upon presenting pictures of other water bodies in a state of eutrophication to the public, inducing that there was no risk of major pollution, mayor Ivan Protnih confused, knowingly or not, two varieties of the same phenomena. It is likely that the wastewater spill could have an impact on eutrophication levels, leading to higher toxicity levels in the water and possibly explaining the tons of dead fish found on the Varna shores in 2020.

Could the tons of dead fish reported on the Varna shore in 2020 be linked with the spill? This question is not easy to answer. But the timing of fish mortality in combination with the known leak and the higher eutrophication levels that very same year provides mounting evidence to support this claim.

This data not only contradicts the mayor’s rhetoric, but also reveals a potential indicator of increased pollution that would have needed to be researched and addressed at the time. This to measure and monitor the extent of the impact of the spill on the Varna lake itself but also subsequently on the bay.

As this could have had – and still could have – an effect on local aquaculture, especially for the mussel farms located in the eastern part of the lake, the products of which are destined for both local consumption and export. Mussels filtrating their nutrients from polluted water are more likely to carry Escherichia coli bacteria, thus representing a potential health hazard to consumers. With higher eutrophication levels, all shellfish become more exposed to feed on these chemical elements, as well as toxic substances released from the algae.

“An environmental catastrophe” with no impact study

Several companies operating in the vicinity of Varna maintain mussel farms, the products of which are destined for local consumption, especially in the eastern part of the lake, which remains the most exposed to eutrophication. Some of these are also destined for export to Romania, France, Italy, Spain, but also Japan, China and the US.

Which companies export to which markets is hard to establish due to a lack of accurate data on the ownership of these farms and the exact destination of their products on the data portals of the Bulgarian administration. While some of Varna’s biggest players and exporters were asked whether or not these health hazards had been monitored, none of them returned our calls or emails.

“A study was ordered on the wastewater leak impact, but no one has been informed of the results”, recalls Stella Nikolova, Varna council member from the Democratic Bulgaria party. She remains as convinced of the fish and mussels toxicity as she was in 2020, when she advised Varna’s citizens not to consume them: “8 months of pollution leads to the conclusion that fish and especially mussels have accumulated all the pollution that is possible from the water. Fish died in the lake due to the flowering of algae, which found a “good” breeding ground for pollution with faecal water”.

According to Nikolova, several institutions even seem to differ on the consequences of the event: “the local Regional Health Inspectorate and the Basin Directorate said that there was no problem with water, while the Institute of Oceanology claims otherwise”.

An expert from the Institute of Fish Resources of Varna expressed concern over an interview request: “This is such a hot topic. I don’t know if some scientist will stand up and speak openly”. Asked about what the potential risks could be for speaking out on the matter, the expert, who wishes to remain anonymous, didn’t provide us with more details.

But according to Radoslava Bekova from the institute of Oceanology, it might be too late already: “Varna’s Lake is an ecological catastrophe”, the expert had said in a 2021 interview, adding that the lake was “on the verge of death”, due to high pollution and subsequent disappearance of various fish species.

Mayor’s Ivan Portnih office, asked about the consequences of the waste water spill and the release of a subsequent impact study, forwarded our questions – such as the planned date of the pipeline’s burial – to the “relevant authorities”. They still remain unanswered to this day.

In the meantime, the pipeline remains exposed to potential leaks for an uncertain period of time, threatening the lake with further pollution in the event of a new leak.